For those of you wondering, we are still alive!!!

We want to offer our sincere apologies for the extremely long delay in posting. I had the most stubborn injury I have ever had in my running career (and that says a lot because I am quite injury prone). I did not go to the doctor to get officially diagnosed, because I am about 99% certain he/she would have prescribed a non-running period for recovery, and, knowing that, I just did that on my own versus paying to have someone tell me. I had extreme pain in my groin and hip area. It actually started right before the Dayton Air Force Marathon that we paced on September 17, but I just toughed it out and paced anyway. Well, a few days after that smart move, I could barely walk. The elliptical did not feel very good either, so I just basically did nothing for four straight weeks. Then I super slowly started adding back in run/walking and got up to three miles of running with minimal pain before trying to go any further. I spent a lot of time stretching and foam rolling.

I still have some pain, especially in the first 1-2 miles of runs, and I cannot go very fast, but we are slowly building up our mileage and speed again. This past weekend, we did an easy 16 on Saturday followed by a faster 16 on Sunday. Running – how I missed you!

I will just go ahead and admit that I had some injury blues, though I do think it was much better than past injuries in terms of my mindset. I stayed positive and kept telling myself that this would not last forever. I really did stay in the moment more in stead of wishing away the injury period. I read a lot and spent time doing other needed things (cleaning the house, catching up on life goals). I also began to rethink my nutrition a bit and decided that I need to incorporate more carbs back into my life. When I struggled with a reaction to too much sugar in 2013, I cut out a lot of carbs in order to drastically reduce my refined sugar intake. However, I think I rebuilt my gut in a good way and I also realized that there are a lot of great carbs that have minimal sugar (hello, oatmeal!). I love potatoes, so a 10 pound bag was purchased this weekend and will likely be consumed 100% by me over the next few weeks. I *may* let Todd have one or two from MY bag. 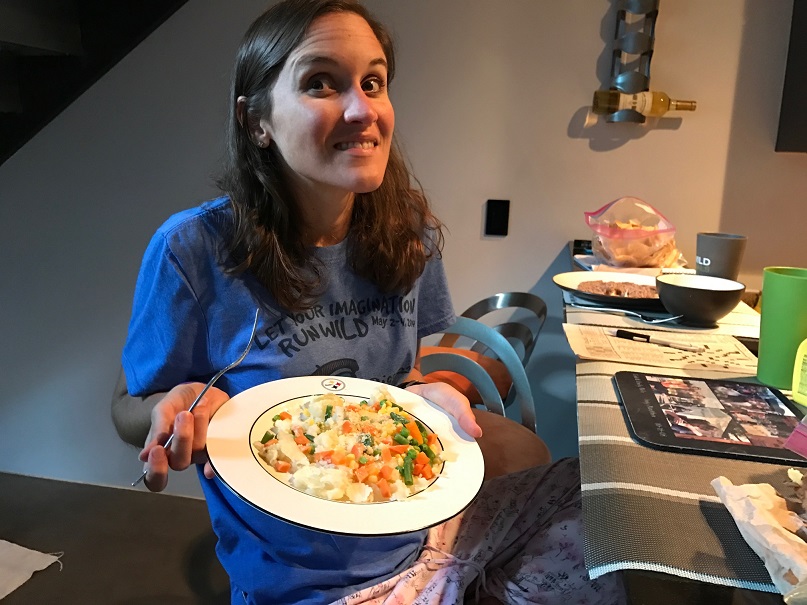 Don’t worry, Todd enjoyed his own idea of a food party. We lucked into a lot of free tacos last week, so he saved them for his Saturday night chow down.

Thanks for sticking with us through our break. Talk to you soon!